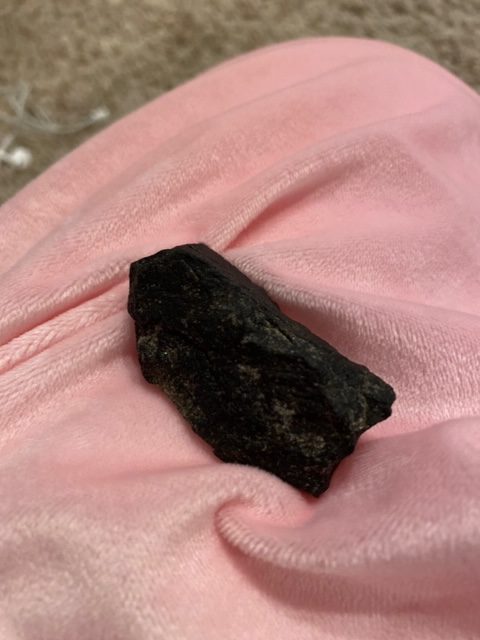 Rock is a little black piece of compressed grains and minerals.  When you look at Rock, you see…. a rock.  Maybe you see a stone, a pebble or perhaps a little boulder.  Something you would walk on, step over, maybe try skipping on top of a lake.  Rock has no value to you and why would it? It’s just a rock.

But to my daughter, it’s more than just a stone.  Rock has a story.

Last month, one of Katie’s best friends went on the trip of a lifetime with her family. In the course of three weeks they went to Australia, New Zealand and Fiji. Before she left, she asked my daughter what kind of tchotchke, t-shirt or small token from the trip she wanted. And Katie told her just what she wanted—a rock.

Sometimes our teenagers are so much wiser than we give them credit.

Katie asked Kayla to find a rock in Australia at the start of the trip and take the rock around on all the adventures.  She wanted to be part of the trip, experience the adventure and enjoy the journey together. She wanted something that no one else saw as valuable and give it a story. On her own, she came up with this idea and because of her, Rock was born.

During the next three weeks, Katie had laughter, joy and fun following the trip… through the eyes of Rock.  Rock became a house-hold name.  Each day we would ask her, “What is Rock doing today?” And every day it was something different.  Rock went swimming in the Great Barrier Reef, skydiving on New Year’s Day in New Zealand, and zip lining in Fiji. Rock went horseback riding, to the Australian Zoo to see kangaroos and koalas and to the hot springs in Wai-O-Tapu.  Rock saw and did all the amazing things Kayla and her wonderful family did, and my daughter felt connected to their trip because of Rock.

At one point during the trip Kayla’s mom texted me and said “Oh my gosh. You should see Kayla when she can’t find Rock. It’s like a teenager who can’t find their cell phone”.  Rock became THAT important.

The day after Kayla got home, she delivered Rock to Katie.  It was a sweet moment as she handed Rock off. After all its adventures, Rock has a new home–a past, story, and a history.  Rock is no longer just a stone, Rock is a treasure. 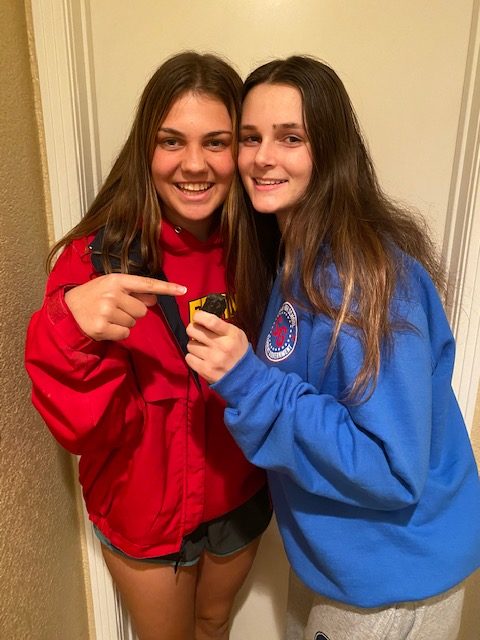 Sometimes the smallest things in life have the biggest meaning. Often the things that look insignificant carry the most meaning. We might be the only ones who see a value in something, simply because we know it’s history.  Or we appreciate things no one else does because we know its journey and because a memory makes something memorable. Having a story makes something priceless.

My cousin Tina’s husband, Michael-the-Marine as we call him in our house, served 3 tours in Iraq and 1 in Afghanistan.  He was in infantry, on the front lines, a proud American soldier and a badass.  He is a great example of the spirit of sacrifice and served 30 years in the Marine Corps. He is Semper Fi to the core.

In 2003 as he was preparing to head on another deployment, he went to dinner with Tina’s civilian boss. The man was reflecting on life and noticed Michael’s cheap Timex Iron Man watch.  He compared it to his own watch, a pricey Rolex, and stated that regardless of the price difference, they were both “just watches”.

He then took his Rolex off and handed it to Michael, asking if they could switch watches and if Michael would wear his Rolex on his next tour of duty.

Michael paused, “There is a chance I may not come back which means your watch might not come back either”.  The man assured him not to worry and they traded watches.

Michael took the Rolex and wore it every day, sending pictures home of him wearing the luxury watch in Humvees, tanks and opulent palaces.  He wore that watch the day the Marines crossed the Kuwait border and it traveled with him over 700 miles as he crossed the country of Iraq. Everywhere Michael-the-Marine went, the watch was on his arm.

Upon his safe return, Michael went to see Tina’s boss to exchange back their watches.  He handed back the expensive watch and the man beamed.

“Before this was just a Rolex and so many people have Rolex watches. It wasn’t special to me but now, I will treasure it forever because you gave it a history and it has a story.” Then, instead of giving back his cheap Timex, the man proceeded to give Michael a brand-new Rolex and told him to go give his new watch a history of its own. And what do you think Michael-the-Marine took on his next deployment? His new watch. 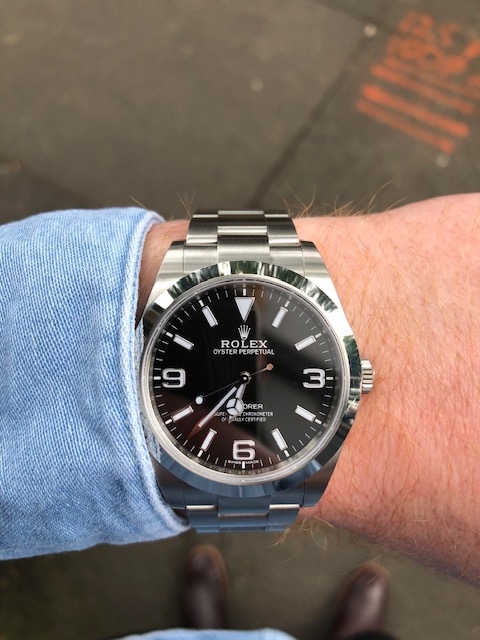 (Side note: Sadly, that watch was stolen during his deployment in Iraq. Such a shame that something he earned by protecting our freedom was taken from him)

Sometimes an object is just an object, and sometimes it’s so much more.  They may sit unused in a drawer or gather dust on a shelf but should a catastrophe strike, there are things we might grab that would make people shake their head and ask why.  The answer is simple.   Treasured objects carry worth because they connect us to treasured moments and treasured memories.  It might be your grandmothers stained apron, a ticket stub from your first concert, or your father’s worn out baseball cap . Maybe it’s your auntie’s teacup, your letterman’s jacket, or your grandpa’s old fishing rod. Or perhaps it’s a rock or a watch.  Whatever you value, it’s your story to tell.

I have the last letter my Tutu (grandmother) sent me in 1988, typed on an old typewriter as she always did, but personally signed with her name.  Her handwriting and that note, invaluable.  She reminded me that manners are the icing on the cake, and I couldn’t agree more. This note is precious because my childhood memories with her are precious. My memories of are wrapped up with that typewriter and her handwriting, always sending us notes in the mail and making us feel loved and special. To you it’s just a piece of paper but to me, it’s my childhood. 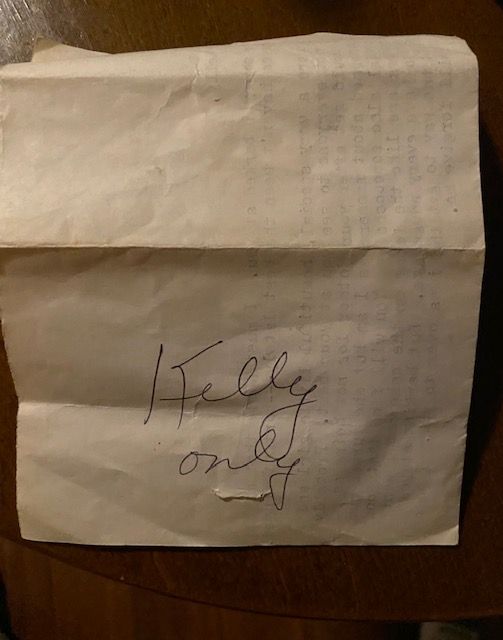 I’m proud of my daughter for asking for Rock.  As a teenager, she is learning what’s important and it’s not the big things, it’s the little things. Experiences and memories make life memorable and unforgettable. Material things have little value but the things that have been handed down, survived a journey or been given to us by someone we love, those are priceless.  They are the things that enrich our story, tell who we are, remind us of our journey and what matters most to us. The things we cherish have personality, character and soul.

What item do you treasure simply because of it’s past or the story it tells? What is something you have that is priceless to you because of a connected memory? 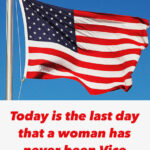 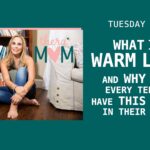 What is a Warm Line & Why Should Every Teenager Have This Number In Their Phone? 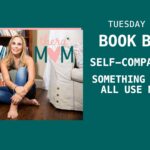 Self Compassion…Something We Could All Use More Of 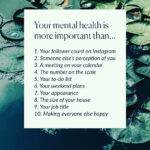 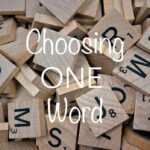 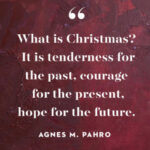 Christmas is an Inside Job 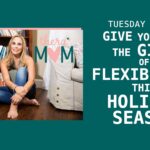 Give Yourself the Gift of Flexibility This Holiday Season